He did much of his work at the University of Groningen, where I currently teach. Work in his tradition continues here, where we have the Groningen Growth and Development Centre, and host the (soon-to- be-updated) Maddison and Clio infra projects.

Despite the importance that Maddison’s GDP and population figures had in stimulating our thinking about economic history and development, it is fair to say that his pre-1820 figures were less than solid. (In one review published in the Journal of Economic History, Gregory Clark said of Maddison’s tendency to “guesstimate” that his figures were as real as medieval relics.)

One reason why most of Maddison’s pre-1820 numbers were indeed questionable is that, while he often relied on the work of others when he could, there just wasn’t much quantitative work available for the period prior to 1820.

But in the last 10 years, economic historians have done a lot work using archival data specific to each country, in ways that are reasonably comparable across space and time (no easy feat). Even taking into account the tremendous uncertainty that will always exist about national account reconstructions for the past (especially about levels, as I explain here), I think it is fair to say we have now made much progress.

Steve Broadberry has been doing an excellent job summarizing what we’ve been learning (and how it was done); see for instance this Journal of Economic Perspectives paper, co-authored with Fouquet. (Ungated version here.)

The following table shows per capita GDP in “international” GK 1990 dollars. (For the sources, see p. 15 of this paper.) To have a rough idea of what this means, keep in mind the World Bank’s definition of poverty as having less than 1 dollar a day, hence about 350 dollars per year. This is a rather arbitrary definition, for sure. It can also be difficult to compare societies which consume very different kinds of goods (see Angus Deaton’s work on PPPs), not to mention that it’s difficult to control for quality improvements. Nevertheless, these problems are mitigated for premodern economies, which consumed reasonably similar baskets, with the exception of different foodstuffs (for instance, for fat, olive oil in South Europe and butter in North Europe). 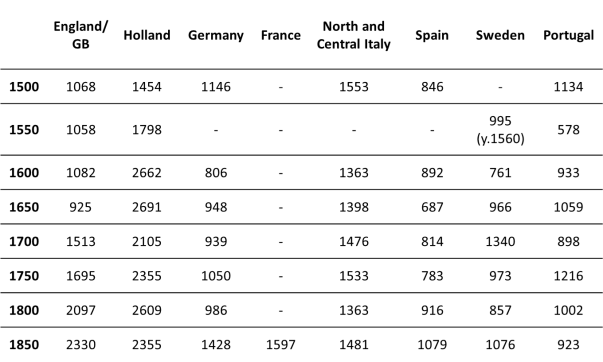 What is clear from the table is that these societies lived well above physical subsistence. And all of them grew in the 1550-1750 period, though some more than others, and though later there were some reversals. (Note that economic historians conventionally refer to countries using their modern borders which refer to a physical territory even for periods when such “countries” did not yet exist, as was the case here for Germany.)

Maddison claimed that Europe experienced significant levels of real income growth during the early modern (i.e. 1500-1800) period. By contrast, Gregory Clark argues that this was not the case. Getting the timing and magnitude of growth right can help us falsify some theories and clarify others. It may also help new explanations surface. Determining who is right in these matters has important implications for our understanding of the origins of the industrial revolution, for instance.

Though medieval income levels were generally higher than Maddison believed (and hence early modern growth slower, given what we know about nineteenth century levels), the conclusions have overall been closer to the position of Maddison than to that of Clark. Interestingly, the opposite is true if we look at the long term evolution of real wages instead of GDP growth; Clark usually focuses on real wages, though he also has a paper on English GDP; but as it is calculated from the demand side, it rests heavily on those.

Also notice that by 1500 population levels had not yet fully recovered from the Black Death, so when we look at early modern growth we should really be looking at what happens after the 1550s. The most anti-Malthusian implication of the data is the fact that both real income per capita and population levels (the latter not shown above) grew at the same time, for most of these countries, during much of the early modern period. Hence for several of these economies the early modern period was one of both intensive and extensive growth.